There are a few things that I struggle with as a mom. One of them is teaching my kids the importance of honoring our service men and women. No matter how I try, I just can’t bring to life the real sacrifice that they give. We’ve watched movies, we’ve read books and we’ve done some hands-on learning. We’ve written letters to soldiers, sent them care packages and shaken their hands when we see them out and about. But it still doesn’t drive home the point, quite like I wanted it to.

A few years ago, we set out to teach our kids the importance of recognizing our service men. We decided to host a Veterans Day lunch. We knew it would be a lot of work, but it was a small gesture compared to that of our military members. 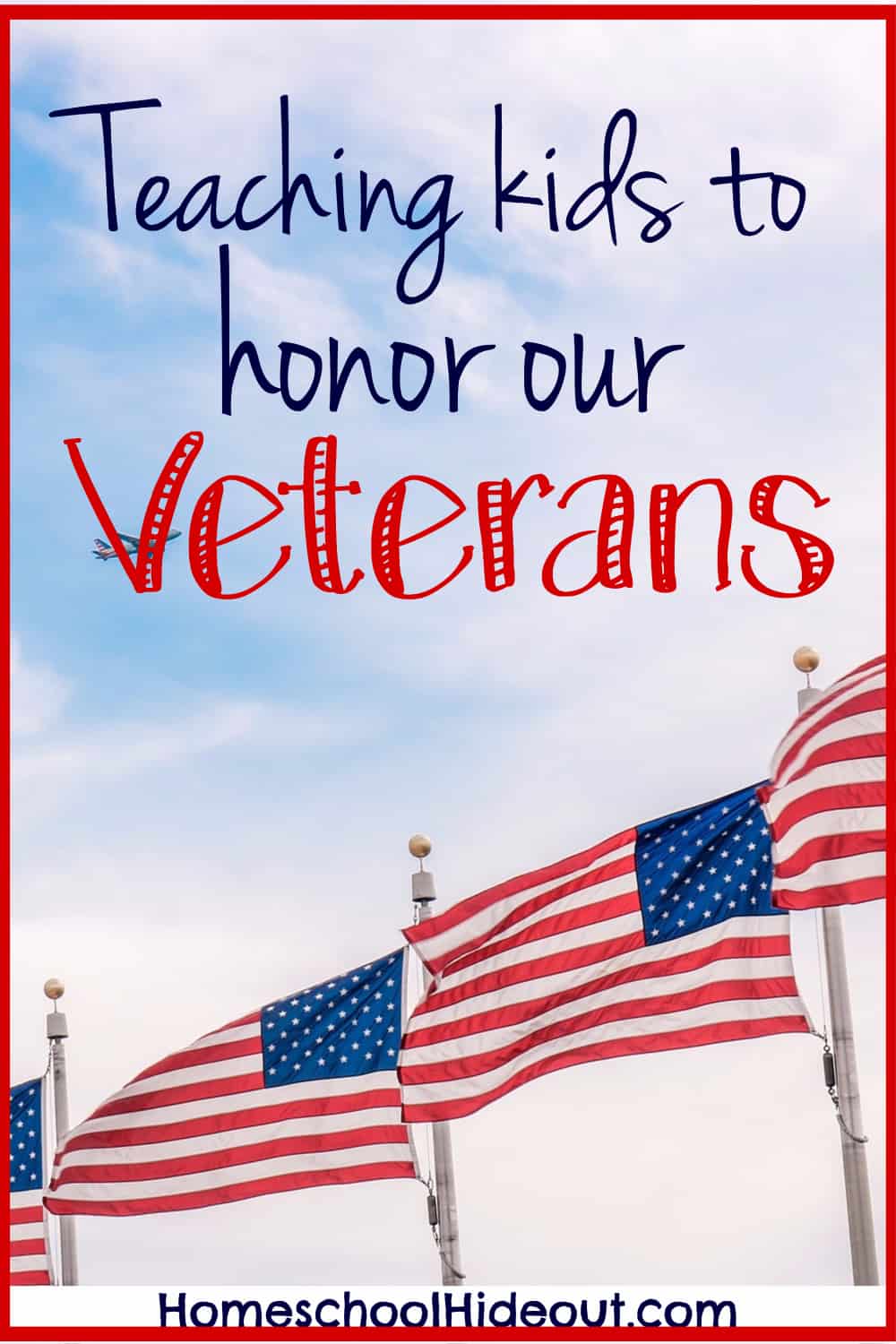 First, we sat down and hashed out the details. The kids gave ideas for food, we talked about our budget and ease of preparing the meal. (Since our lunch began at 11:00 am, we wanted something we could make ahead of time so we weren’t rushing around on the day of the lunch.) They got permission to use their grandparent’s church, picked a time that all of our “assistants” (aka: Grandmas) would be able to help and chose the time. We agreed to keep the decorations simple, using only a string of flags and a cloth Americana bunting.

Once we had the information, we got started on our invitations. This year, I let the kids have free reign on the design. I gave them blank cards, acrylic paint, make-a-dot markers and fine point sharpies and they set to work. I loved that each card had it’s own design, with no two the same. The kids did the majority of the work on the invitations, but I did address the envelopes.

Because we already knew how well the lunch went last time, we opted for the same foods. We smoked 4 pork roasts the day before the lunch, then shredded it using our Kitchen Aid Mixer. My mother-in-law purchased the meat when it was on sale, and only spent about $15 on all of it! We also fixed macaroni and cheese, baked potato salad, deviled eggs and baked beans.

“The Grandmas” (as we lovingly call them) helped the kids for a few hours on the day before the lunch. They whipped up 5 yummy desserts for the veterans to enjoy.

From our last Veterans Day lunch, we learned that sometimes the men need prompts to talk. They were willing to share, but they just weren’t sure what exactly we wanted to know.

We came up with a new batch of questions for them to answer. The girls cut them into strips, folded them up and placed them in my new favorite bowl. Each veteran drew a question to answer. We made sure they felt comfortable answering each question. There was no pressure and they knew they could put it back if they wanted to.

We also played a few rounds of “Did You Know?” It was basically trivia facts about the US Military.

“Did You Know” Questions? 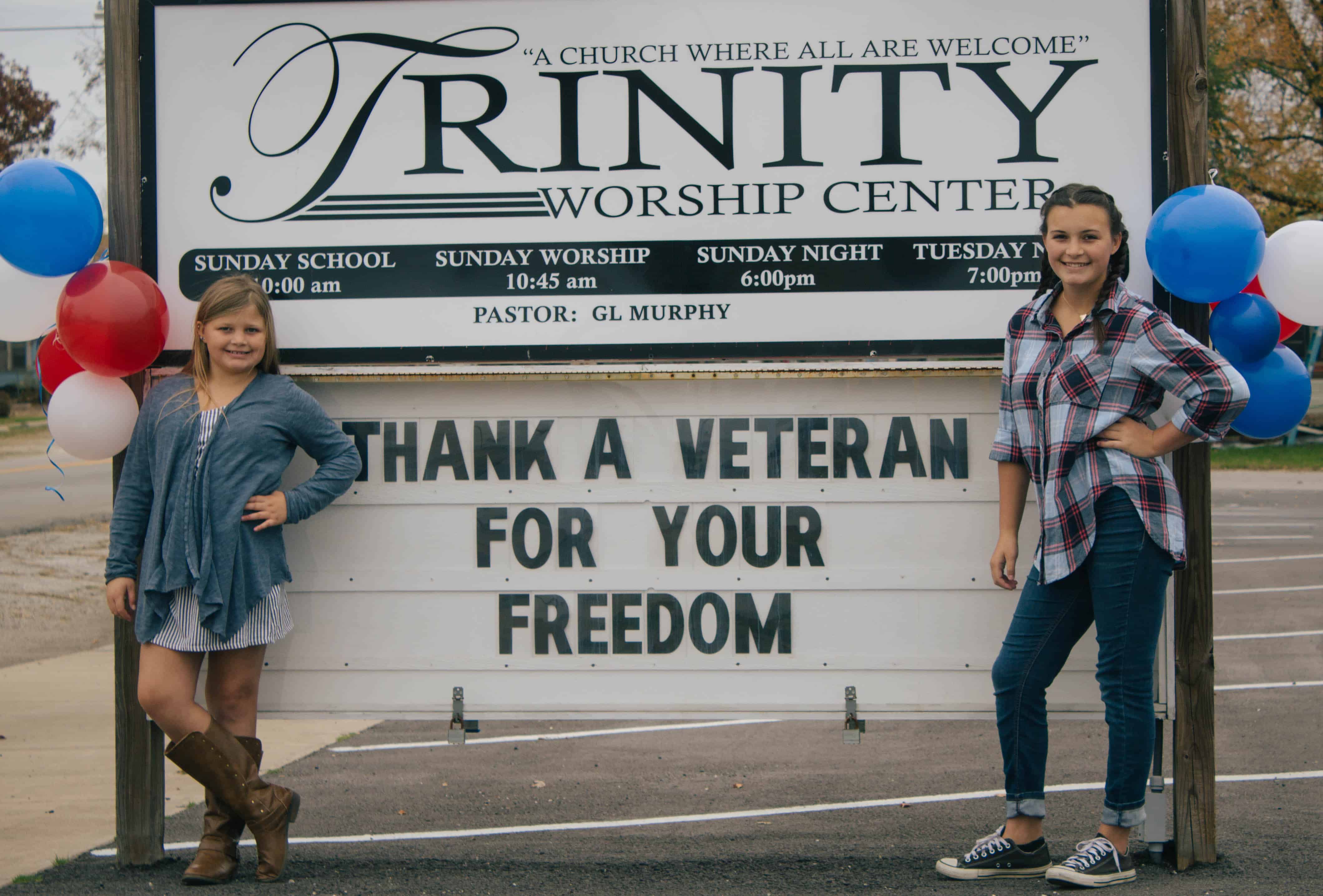 We did the majority of the work on the Friday before the lunch. The food was nearly all prepared. All we had to do was make the macaroni and cheese and the beans. Everything else just needed heated up. Thank God for CrockPots. 😉 The place was decorated nicely and balloons were strung up near the driveway.

We knew that by holding our Veterans Day lunch on Veterans Day, we would have a much smaller crowd. And we did. There are a ton of places that hold ceremonies, free lunches and events on that day, so a lot of veterans opted for that. We debated between inviting even more veterans and opening it up to the public or keeping it small and intimate. We decided to keep it small. Still, we had 5 veterans show up.

We began the day with the kids leading us in the Pledge of Allegiance, followed by Miss Manners blessing the food and thanking God for the brave men and women who sacrifice for this great country.

Then our veterans dug in to the grub while the girls were interviewed by the local news station. (Yes, they were super nervous but felt like superstars, anyways!)

While the veterans finished up their desserts, we played a few rounds of “Did You Know?” The veterans were shocked by some of the facts and not too surprised by others. With each new fact, the veterans told us stories, memories or simply added to it. The day was full of knowledge!

Next, we played “Pick a Question.” We learned so much from this game! The veterans really helped to paint a picture of what life was like while enlisted. 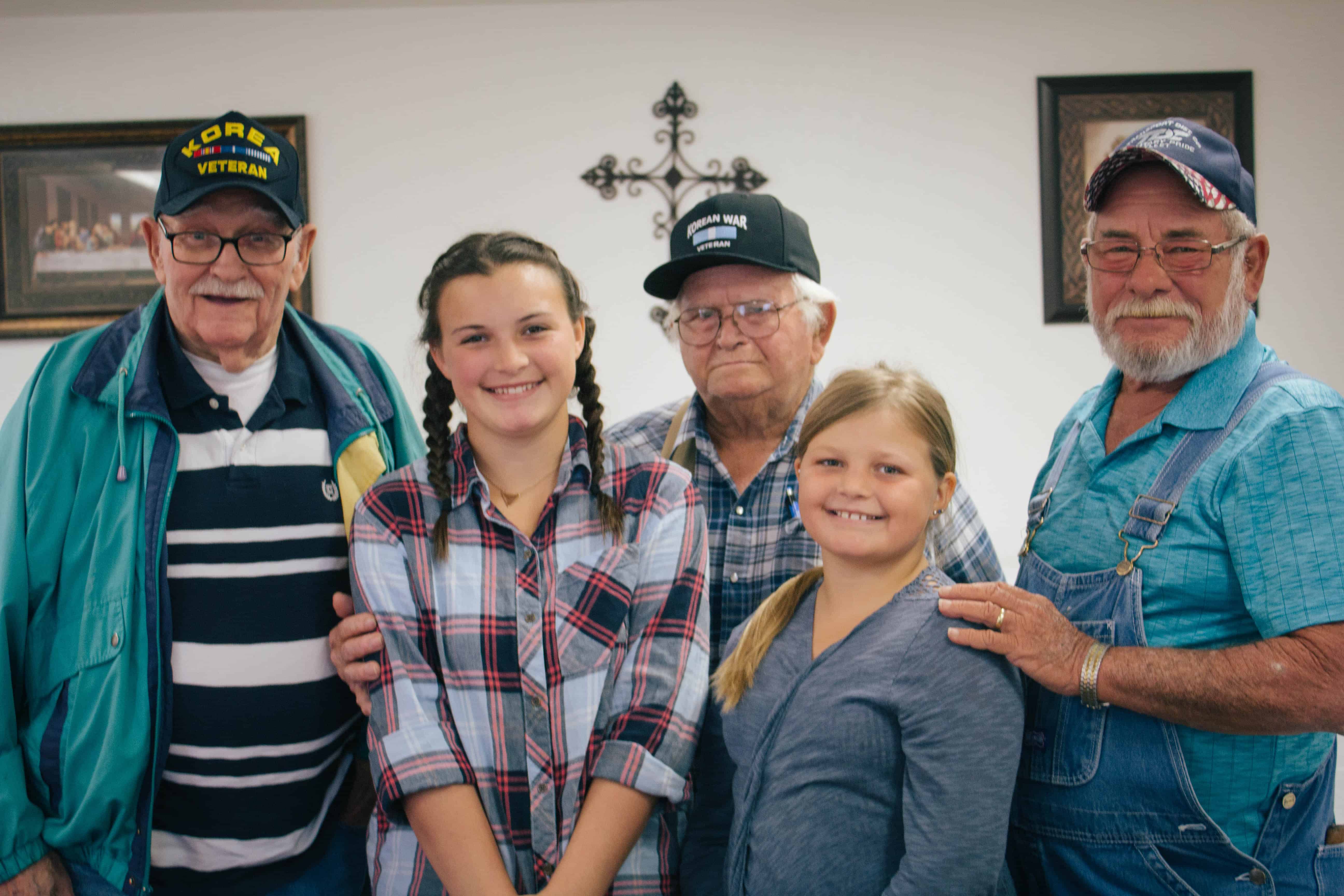 All in all, our 2017 Veterans Day lunch was a success! We bonded over stories and learned more than a textbook would ever teach us. In our own small way, we honored those who all-too-often feel forgotten. 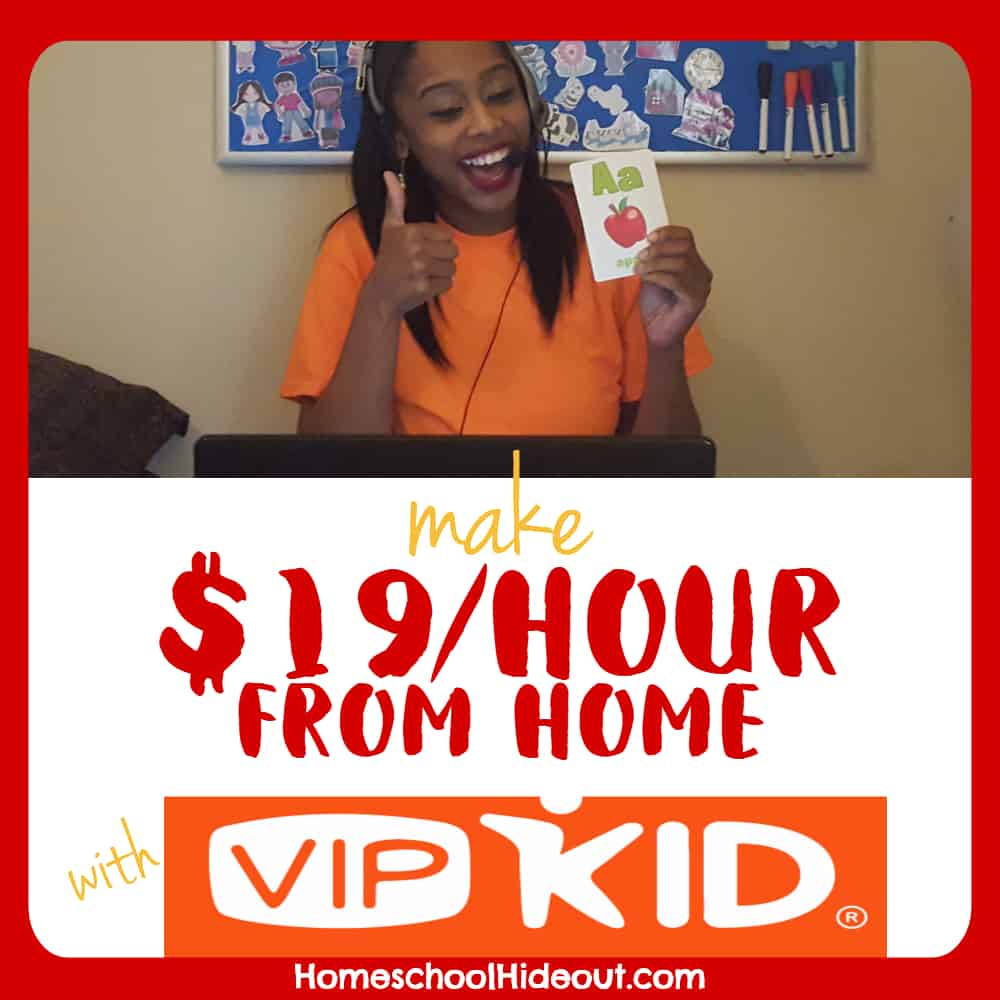 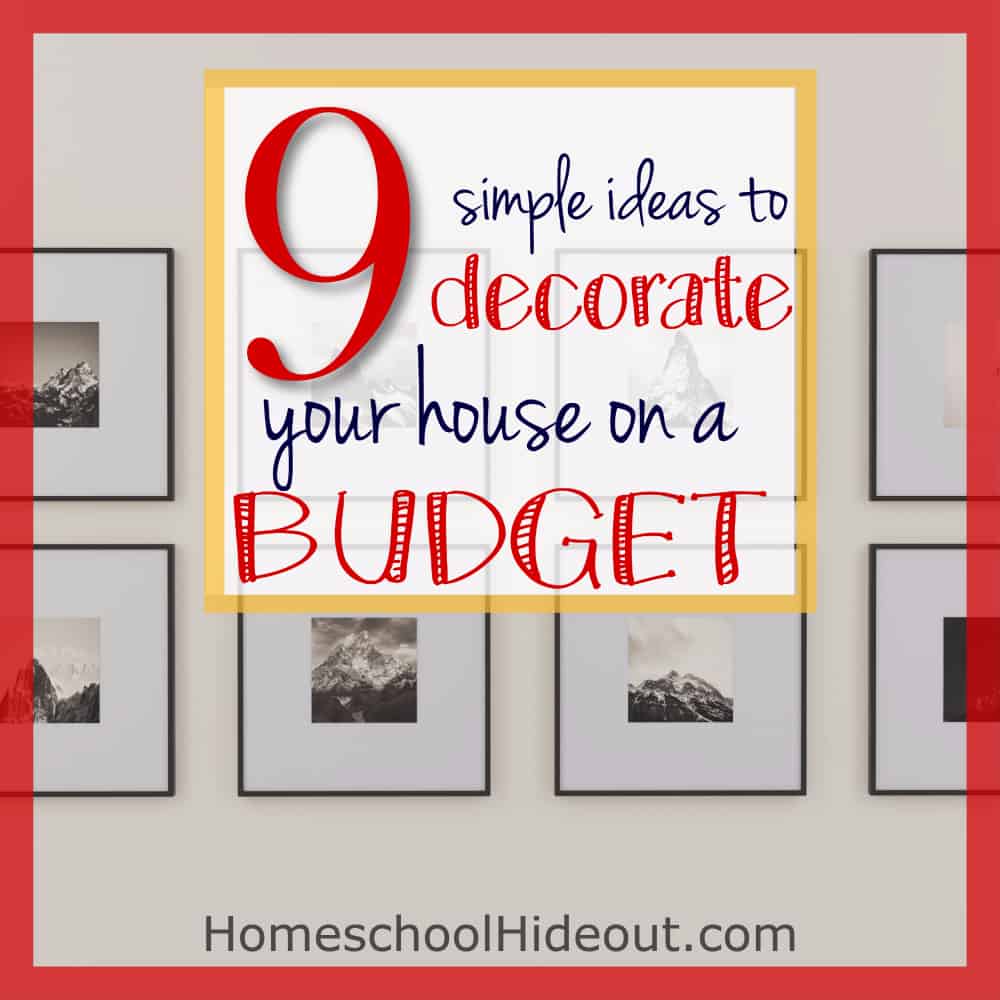 How to Decorate on a Budget
Read Next Post →