January is National Soup Month but we’ve hardly needed any soup to keep us warm this year. In my neck of the woods, it’s been averaging about 50° this January.

Until today. Today, the wind was fierce. The cold was stinging and the temperature was below freezing.

An excuse to read one of my favorite children’s books and whip up the delicious Stone Soup recipe to go along with it! 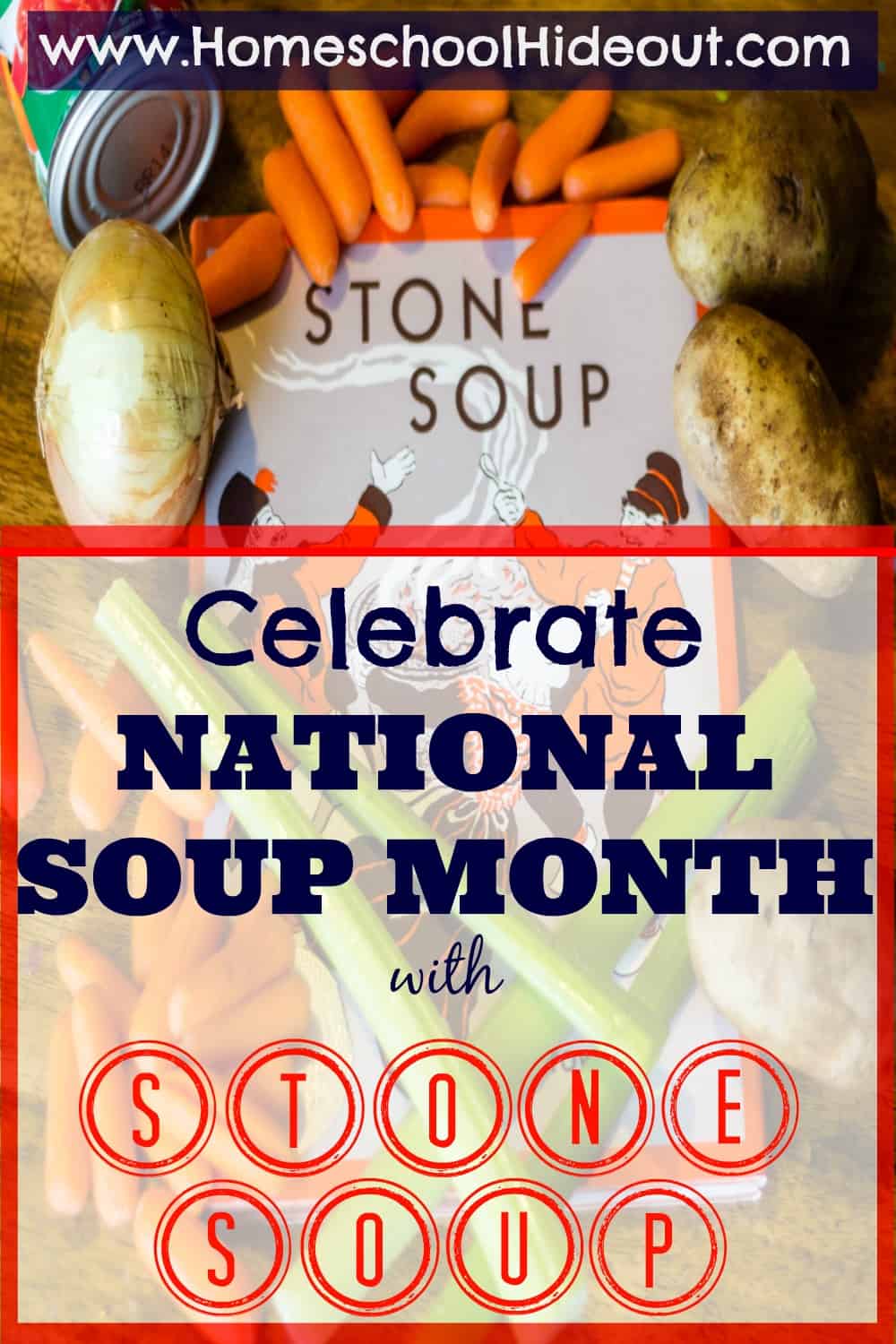 I chopped an onion, grabbed a few carrots, diced up some celery and started reading Stone Soup.

The quick story is a tale of three tired soldiers, travelling home from war. They long for a meal and a warm place to sleep.When they finally come to a town, the townspeople refuse them, saying they, too, haven’t eaten for days and their beds are all full, with no room to keep the soldiers. Their lack of generosity didn’t deter the soldiers, though!

The soldiers, wise as they are, say they must make a pot of soup big enough to feed the entire town! All they request is a large pot and some heated water. The townspeople obliged and soon they had a pot of warm water on the fire.

Next, they ask for 3 smooth stones. The people watched in shock as the soldiers added the stones to the pot. 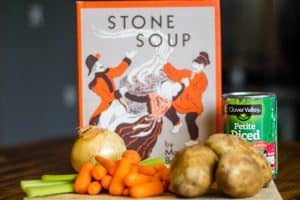 As the soldiers stirred, they commented “Every soup needs salt and pepper.” The kids ran to fetch some. As they added it to the pot, the soldiers said “Soup this good deserves carrots!” The people fetched carrots without question.
The soldiers proceed to comment about how much tastier the soup would be with each ingredient. Potatoes, cabbage, barley and milk were added.

Once the soup is made, the soldiers note how delicious it is, but my, how much better it would be with bread and a roast and even cider! The townspeople rounded up all 3 foods to complete the feast.

Once everyone had dined to their hearts’ content, they danced. They danced into the wee hours of the night, laughing and talking with one another. When it was finally time for bed, the soldiers, again, asked if there was a place for them to sleep. The townspeople cried “Of course!” and set them up in the nicest rooms in town.

The next morning, as they prepared to continue on their way, the townspeople thanked them and said “We will never be hungry again now that we know how to make Stone Soup!” 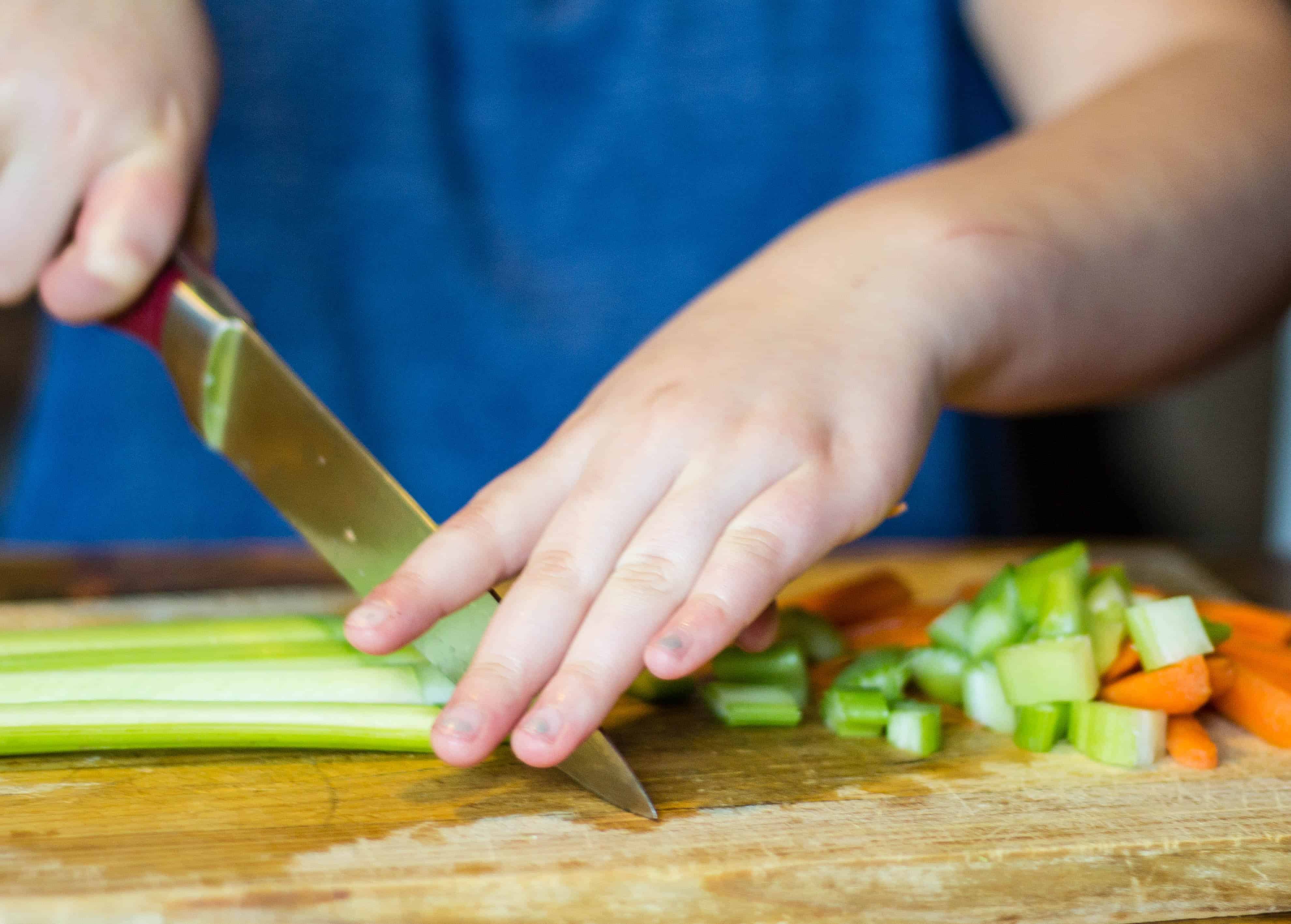 After reading the book, we acted out the story. The kids enjoyed grabbing the ingredients and adding them to the pot, as the soldiers “asked” for them. We opted not to put stones in our soup (because my husband says nasty things live on rocks!) 🙂 but instead chose 3 small, smooth potatoes to act as our stones. We didn’t dice them so the kids could recognize them as the “stones” in our soup.

You can wash stones and add them to the soup. In fact, the stones actually served a purpose in the soup. They are full of minerals and add natural salt to the stew!

You can create any soup using this book but we chose to make a hearty vegetable soup. We added a can of diced tomatoes, celery, chicken thighs, garlic, green beans, corn, carrots and fun-shaped pasta to our crock pot. We added water until everything was covered. Next, we cooked on LOW for about 8 hours then de-boned the chicken before gobbling it up! It tastes delicious served up with homemade bread.

Stone Soup may not sound very appetizing but it’s fun to create memories while cooking dinner with your kiddos!