“It does not matter how slowly you go as long as you do not stop.”

Once I learned that Confucius heavily influenced the use of chopsticks, this quote made complete sense to me.

In case you’ve never seen me eat with chopsticks, let’s just say you’re in for a treat. After poking, wrapping and attempting to get the food into my mouth, I finally give in and use my handy- dandy spork.

No matter how real the struggle is, chopsticks are something that are just so much fun to use! Because of their stubborn yet charming effect, they’ve dedicated a day set aside to celebrate these wooden wonders.

But, here’s the thing: You didn’t actually KNOW that it was National Chopstick Day and while you know the kids would LOVE to celebrate, you haven’t prepared anything. No problem-o!

Learn How Chopsticks Are Made:

With over 85 billion pairs of chopsticks used every year, it’s amazing to see how they manage to produce them.  Some are produced in small assembly line fashion,  some are created in large factories  and others are made in America. While most chopsticks are made of bamboo, they can also be made from silver, gold, porcelain, plastic, animal bone, ivory, metal, coral or jade. Only the most wealthy would use gold chopsticks. Emperors used silver chopsticks because they believed the silver would turn a black if it touched poison. (It was later discovered that silver turns black when it comes in contact with hydrogen sulfide, which onions, garlic and rotten eggs all release. I wonder how many people died over that little mistake?)

Learn to Use Chopsticks:

You only need two things when learning to use chopsticks: chopsticks and patience.

Whether you choose to create a basket, bird feeder, pencil holder, or just a 3D shape, the possibilities are endless. By placing several chopsticks and other simple craft materials in front of your kids, you allow them to engineer using their imaginations. Don’t give them any ideas and see what they can come up with on their own. Some easy supplies to include are pipe cleaners, rubber bands, Play-Doh and yarn. 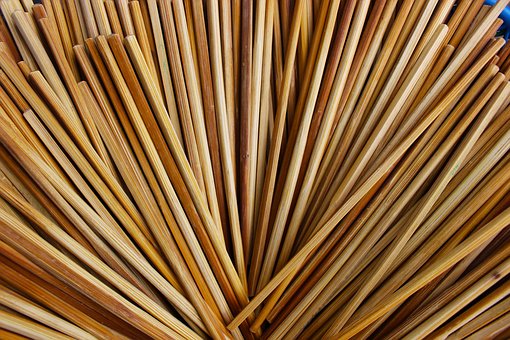 All ages will enjoy this classic game. You can paint your chopsticks by placing them in a baggie, adding a few drops of paint and rolling them around until they are covered in paint. The classic game is simple and great for strengthening fine motor skills. Using only one stick known as the Master Stick, try to pick up a stick from the jumbled pile of sticks without moving any others. The player with the most sticks at the end of the game wins.

Using chopsticks, try writing your spelling words. Arranging the sticks to look like each letter will take several sticks, so be sure you have plenty.

Using their own set of chopsticks traditionally, each player tries to get the most marshmallows in their bowl before time runs out. This fun competition is great practice for those who are new to using chopsticks.

Using only rubber bands, a box cutter, 6-8 pairs of chopsticks and a plastic spoon, build a catapult to launch craft pom-poms. Add some excitement by having a contest to see who can launch their pom-poms the furthest.

Did you know that you use 30 joints and 50 muscles when using chopsticks? Or that the Chinese have been using chopsticks for over 5,000 years? There are 4 main styles of chopsticks and nearly 1/3 of the world uses them daily, which means almost as many people use chopsticks as forks! Not all Asian cultures use chopsticks. In fact, people living in India, Malaysia, Philippines, Indonesia, Thailand and Central Asia traditionally eat with their hands!

Research the History of Chopsticks-

Chopsticks have been used in China for over 5,000 years.  If you’ve ever studied early China, you are aware of the rough terrain, droughts and famine that plague the region. Because of this, food was scarce and using a spoon would result in people taking large portions. Food was cooked in smaller sizes to preserve the wood used for cooking, making it easier to eat it with the twigs which they used to remove the food from the pot. Eventually, the twigs became chopsticks.

Confucius is credited with the rising use of chopsticks. He was a vegetarian who once said “An honorable man should keep away from knives and never allow them on his table.”

Cook Up Some Chinese Cuisine:

We love Chinese food at our house! From chicken fried rice to stir-fry, the possibilities are endless. Create your favorite Chinese dishes at home. For our dinner, we cooked a simple chicken stir-fry, seasoned with hoisin sauce and soy sauce. We added whatever veggies we had in the fridge and create a delicious meal that everyone loved. If you’ve never tried making homemade egg rolls, you must! The kids love it and it’s easier than you think.

Lay the egg roll wrappers so they’re making a diamond shape. Scoop about 1/3 of a cup of mixture into egg roll wrappers, in a horizontal rectangle. You don’t want to spread the mixture out, but instead keep it in a log-like form. Fold sides in and the bottom corner up, making an envelope shape. Next begin tightly rolling from the bottom, making sure all of the mixture stays neatly inside. Dab a small amount of  egg on the top corner to seal.

Fry  in oil at 375° until golden brown.
Enjoy with your favorite sauce.

If you’re looking for some fun ways to celebrate National Chopstick Day, delight your kids in Chinese culture and cuisine. It’s a simple way to take a trip to another land, without ever leaving your house.

Need ideas for family time, homeschooling or how to juggle it all?