YouTube has revolutionized the way kids learn, interact and spend hours upon hours of their time each week. These days, there isn’t much you can’t find on YouTube. My husband is obsessed with Alec Steele’s blacksmithing videos. I head to YouTube when I need recipes or homeschool encouragement. But my kids, well, they turn to YouTube for everything. From watching people cut open squishies, to finding the perfect recipe for their slime shop, they are constantly looking stuff up on YouTube.

I love that they’re constantly learning new things from YouTube, albeit some of those things are incredibly stupid. 😉 But YouTube can be a huge game-changer for helping your kids discover new passions and spark a love for learning new skills.

A hundred years ago, people believed that books were actually BAD for you! Can you imagine! But they distracted people from their work and seemed to be a waste of time. Thankfully, we know different now. However, I find it funny that I scoff at the thought of books being useless, yet I often feel the same way about technology. Instead of looking at the hours spent watching videos in a negative light, I decided to round up some educational YouTube channels that my kids will actually enjoy! 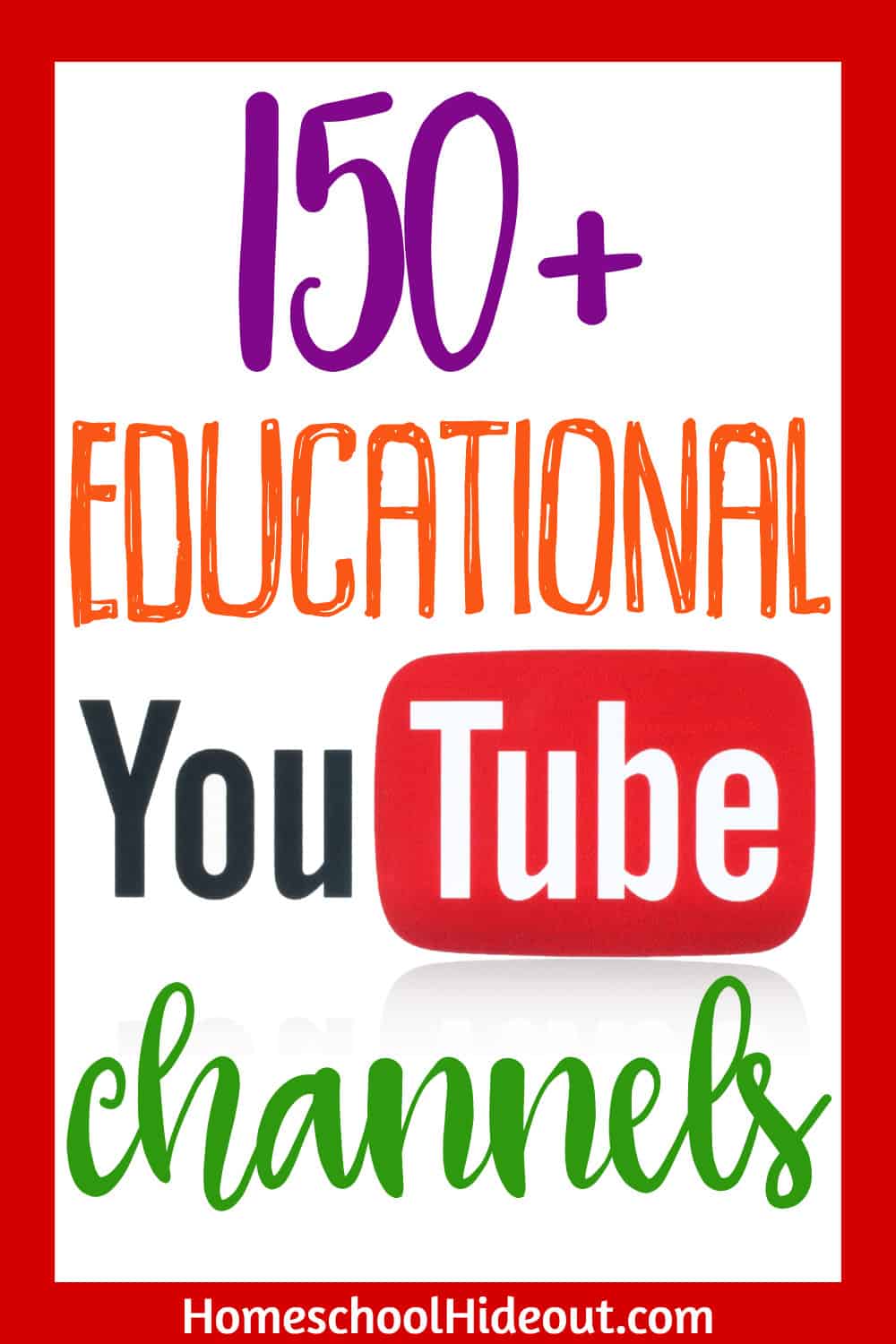 Before we get started, you should know that I tried my best to arrange the list by subject. However, most channels have more than one topic, so I tried to pick the category that most of the videos fell into. Some of the science videos will also teach you history, for example.
Instead of telling you about each channel, like I do on my Netflix, Hulu and Amazon Prime movie lists, I decided to pick out a video title that I found most interesting. These are just a few of my quick picks and you’ll want to head to YouTube to find more videos from each channel.

Once you find an educational YouTube Channel you love, you’ll want to make sure you can easily find it again. By subscribing, you’ll get notifications every time that channel posts a new video!

One of the questions we get asked the most is how we use our Netflix movie lists in our homeschool. Well, that’s easy! We just watch one movie per day, as we eat lunch. But this list of educational YouTube channels is more convenient than Netflix in that we can watch a video quickly and at any time.

A few ideas of when to sneak in these educational YouTube channels:

YouTube is great. It really is. But as awesome as it is, there are still some down sides to using it with your kids. Your biggest concern will be your child seeing adult content on YouTube. Thankfully, that’s a fairly easy fix. Here’s how you can turn the safety settings on in under a minute:

Now…let’s get started, shall we?

and the title of one of their videos we found intriguing!

Channels with Random Facts & Info to Really Make You Think:

Second Thought: “What Would Happen If You Stopped Drinking Soda”

Crash Course: “We Could Be Heroes”

It’s Okay to be Smart:  “How an Igloo Keeps You Warm”

Thought Cafe:  “Could We Live on Mars?”

Seeker: “Is Jupiter the Reason for Life on Earth?”

TED x Youth: “How to Become an Entrepreneur”

Today I Found Out: “The Quest for the Four Minute Mile”

Kurzgesagt: In a Nutshell: “The Deadliest Being on the Planet Earth”

Finding Stuff Out: “How Stuff Breaks”

TED Ed: “Why Does Your Voice Change as You Get Older?”

Real Life Lore: “The Most Unlikely Things that Could Happen to You”

Think Twice: “Fitting a Cube Through a Copy of Itself”

Above the Noise: “How Sunscreen Hurts Coral”

Mr. Fix It: “How to Restore an Old Wheelbarrow”

Life Noggin: “What Happens When You Get Rabies?”

Free School: “Why Does the Eclipse Move West to East?”

Soliloquy: “Is the Shape of Colorado a Boring Rectangle?”

Conjecture: “Why Does Pouring Water “Gulp?”

AnthroKnowldgey: “The Oldest Buildings on Each Continent”

Draw Curiosity: “How This Honey is Saving Elephants”

Think Fact:“How Many People Did It Take for You to Exist?”

Smarter Everyday: “Tattooing Close Up and In Slow Motion”

Reactions: “Why Does Stinky Cheese Stink?”

Half as Interesting: “That Time 3 Astronauts Went on Strike In Space”

Wonder Why: “Why Can’t We Print Money Off to Pay Debts?”

The School of Life:“The Secrets of a Privileged Childhood”

Origin of Everything:“Why Do We Wash Our Hands After Going to the Bathroom?”

Knowledge Hub: “How a Rebellion Built the Panama Canal”

Brain for Breakfast: “How Did Cats Build the Pyramids?”

Computerphile: “Inside a Crypto-Mining Operation”

Hot Mess: “Could Climate Change Make you Allergic to Meat?”

Smithsonian Channel: “How a Tomato Paid Off This Man’s Mortgage”

For Critical Thinkers: “Owners or Occupiers”

In the Making: “Simple Science to Stop Starvation”

The King of Random: “Mixing Lava with Liquid Nitrogen”

It’s AumSum Time: “Why Do Cats Have Vertical Pupils?”

Meet Arnold: “What If You Could Fly Into Space in Your Car?”

Minute Earth: “Why Most Rain Never Reaches the Ground”

Minute Physics: “How to Build a Teleporter with Aliens”

Kids Science: “Fireworks: How Does It Work?”

Physics Girl: “How I Broke a Wine Glass with my Voice and Science”

ASAP Science: “What Does Your Poop Say About You?”

SciShow Kids: “What Happens If You Swallow Gum?”

Applied Science: “A Refrigerator that Works By Stretching Rubber Bands”

Veritasium: “Why Women are Stripey”

Popular Science: “What Would It Take to Power Your Home for a Day?”

Backyard Scientist: “How Strong is Oobleck?”

Anna’s Science Magic Show Hooray!: “Why Do We Have Butts?”

GreatScott!: “Make Your Own Tesla Coil”

Objectivity: “Moon Beavers and Other Hoaxes”

SciShow Space: “What if the Universe Was Shaped Like a Donut?”

Deep Astronomy: “Nothing is Easy About Humans to Mars…But Can We Make it Easier?”

Space Rip: “Are There Other Earths?”

Deep Sky Videos: “Where Did the Sun Come From?”

Isaac Arthur: “Civilizations  at the End of Time: Dying Earth”

Fraser Cain: “How Do We Know Where Gravitational Waves Come From?”

The Planetary Society: “How to Prevent Asteroids from Hitting Earth”

Brave Wilderness: “Will It Ink? Catching an Octopus”

Lelslie the Bird Nerd: “Do Female Songbirds Sing, Too?”

Deep Look: “Why Does Your Cat’s Tongue Feel Like Sandpaper?”

Lab of Orinthology: “Wetland Loss in the Yellow Sea”

National Geographic Wild: “This New Species of Pygmy Seahorses is the Size of a Lentil”

Ten Minute History: “The War of the Roses”

The History Guy: “The Great Royal Buffalo Hunt of 1872”

The Armchair Historian: “What Made the American Civil War so Deadly?”

Simple History: “Why Was a Paste Applied to German Tanks?”

The Great War: “A Farewell to Arms: Ernest Hemingway”

Alternate History Hub: “What if the Fourth Plane Hit Its Target on 9/11?”

America From Scratch: “Should We Rewrite Our Constitution?”

Suibhne: “The Animated History of ISIS”

Timeline: “Cleopatra: Portrait of a Killer”

PBS Eons: “What a Dinosaur Looks Like Under a Microscope”

What If Al Thist:“What if the Handmaid’s Tale Actually Happened?”

Over Simplified: “The War that Changed the English Language”

Geography Now: “What if Earth was Upside Down?”

Next time you have a few extra minutes, tune into one of your favorite educational YouTube channels and learn something new!

Before long, you’ll be a genius! 😉